What is a Project Labor Agreement?

Our capital improvement programs are possible through project labor agreements (PLAs). These are formal agreements with local labor unions which ensure that local workers and residents impacted by these capital projects have access to construction training and job opportunities. Over the years, PLAs have brought thousands of critically needed jobs to San Francisco, while building healthier, more reliable water and sewer systems.

Timeline of Our Project Labor Agreement

In March of 2007, the SFPUC entered into a Project Labor Agreement (PLA) with the building and construction trades unions to cover the SFPUC’s Water System Improvement Program (WSIP). In 2008, the Commission approved Addendum No. 1 of the Agreement, which extended the Agreement to the Advanced Meter Infrastructure project.

In 2019, the Commission approved the Second Addendum to the PLA which added seven projects to the Agreement, updated provisions of the PLA to be consistent with terms in the Extension Agreement, and authorized the General Manager, with the approval of the Joint Administrative Committee (JAC), to add additional projects to the PLA without requiring Commission approval or formal amendment of the Agreement. The seven projects were: the Harding Park Recycled Water Project, Bay Corridor Transmission and Distribution Project, Sunol Long Term Improvements Watershed Center Project, Auxiliary Water Supply System (AWSS) Pipeline Improvements Projects, Southeast Community Center Project at 1550 Evans, Treasure Island Wastewater Treatment Plant Project, and Mountain Tunnel Improvement Project.

Pursuant to the process detailed in the Second Addendum approved by the Commission, the JAC added the Water Enterprise Capital Improvement Program (WECIP), including AWSS; (2) the Hetch Hetchy Capital Improvement Program (HCIP); and (3) the Wastewater Enterprise Capital Program (WWECIP). Appendix A-1 has been updated to reflect all of the projects covered by the PLA.

Information for Contractors and Unions

The Uniform Substance Abuse Prevention Policy was adopted by the SFPUC and the Unions as part of the PLA for the safety of the public as well as the safety of fellow employees. The policy dictates that employees are not permitted to perform their duties while under the influence of drugs or alcohol. This program supersedes any policies negotiated for any other work outside of the Project by Contractors and the Unions that might otherwise apply. Learn more about the policy and the approved Third-Party Administrators.

Copies of the collective bargaining agreements (or Schedule A's) of the labor unions signatory to the SFPUC’s PLA are available for inspection by contractors seeking to bid on covered projects. 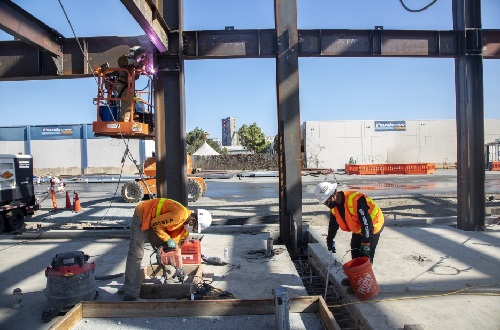 Read about local residents working on our projects! From help removing barriers to pre-apprenticeships and incumbent worker training, it is our priority through the PLA’s Job Training and Opportunities Program to help local workers access long term careers offering family sustaining wages and benefits with construction contractors and professional service firms as we continue to implement necessary upgrades to our water, power, and sewer systems.